A Scene From The Sets Of Indian Police Force, Featuring Shilpa And Rohit Shetty 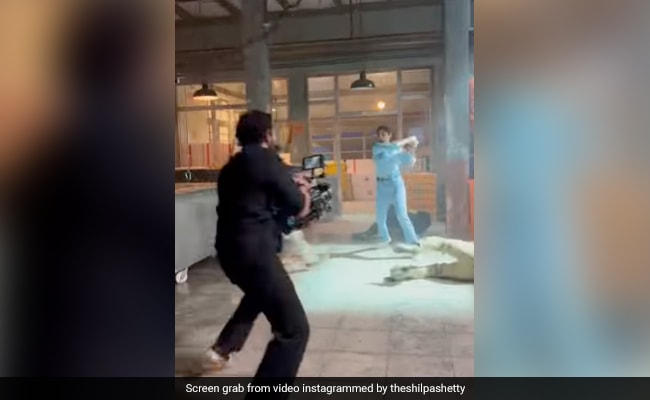 Shilpa Shetty has shared a video from the sets of her upcoming project. The behind-the-scenes video is from the sets of Rohit Shetty’s debut web series Indian Police Force. The video opens with Sidharth Malhotra fighting a bad guy. Rohit Shetty, who has cables attached to his body, is seen recording the sequence mid-air. He then pans the camera to Shilpa Shetty, who is in full action mode. Sharing the BTS clip, the actress wrote, “Never a dull moment on sets of Indian Police Force Raw and real. Don’t miss Rohit Shetty on the harness.” She has also added a “teamwork” hashtag in the caption.

Have a look at the BTS video:

Sidharth Malhotra has also shared the same video on his Instagram timeline. He wrote, “The ultimate action director Rohit Shetty in full form.”

Indian Police Force, which will stream on Amazon Prime Video, also stars Vivek Oberoi in a crucial role. The series is a part of Rohit Shetty’s Cop Universe.

A press statement issued on behalf of Rohit Shetty, read, “I’m delighted to be collaborating with Amazon Prime Video to breathe life into this story which will transcend geographies and linguistic barriers, providing me an opportunity to showcase the same to audiences worldwide.”