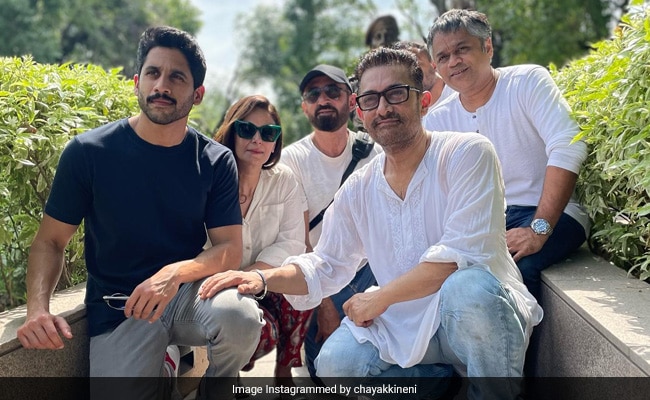 Aamir Khan is busy promoting his upcoming movie Laal Singh Chaddha with his co-stars Naga Chaitanya and Mona Singh. On Tuesday, the team visited the National War Memorial, Delhi. Actor Naga Chaitanya has shared several pictures on his Instagram handle featuring Aamir Khan, Mona Singh and director Advait Chandan. Sharing the post, he captioned it as: “A morning well spent at the National war memorial New Delhi with the team of #laalsinghchaddha. Such a lovely experience.” In one of the images, Aamir Khan can be seen interacting with the officials, while in other photos, Naga Chaitanya and Mona Singh can be seen offering their tributes to martyrs.

Helmed by Advait Chandan, Laal Singh Chaddha also stars Kareena Kapoor in the lead role. The movie is the Hindi remake of the 1995 hit movie Forrest Gump, starring Tom Hanks. The movie marks the Bollywood debut of Naga Chaitanya, who will be playing the role of Laal’s (Aamir Khan) friend Balaraju Bodi in the film.

Meanwhile, during an interaction with an international publication Aamir Khan spoke about Shah Rukh Khan’s cameo in the film. In a viral clip from the interview, the actor can be heard saying, “Shah Rukh is a friend, and I told him that I needed someone who could represent what Elvis represented in America and is the biggest iconic star in India, which is why I’m coming to you.”

Produced by Aamir Khan Productions and Viacom 18 Motion Pictures, Laal Singh Chaddha is slated to hit the theatres on August 11.