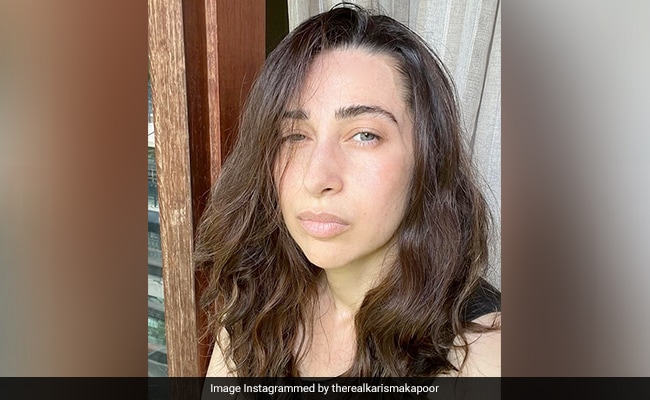 Let us tell you, Karisma Kapoor’s mood today is “au natural.” How do we know? The actress made the announcement with an Instagram post. Don’t know about you but we cannot stop gushing over her natural beauty. Karisma is wearing a black tank top with her brown tresses flowing down her shoulder. Sharing a selfie with her fans, Karisma said, “Mood is au natural.” As soon as Karisma dropped the picture, fans and Karisma’s industry colleagues rushed to the comment section to shower praises on the actress. Shibani Dandekar has called her a “beauty.” Celebrity stylist Esha Amin follows the suit.  A fan said, “You look pretty no matter what.”

Can anyone beat Karisma Kapoor at the selfie game? We don’t think so. Still in doubt? Take a look at Karisma’s “50 shades of grey” post.

It is safe to say that Karisma Kapoor’s Instagram feed captures food indulgence, vacations, and fashion statements in the very best way. A few days ago, Karisma reminded us that she has been a style icon ever since the 90s. The post had a Kim  Kardashian reference. Sharing an image of herself, dressed up in a crop top and black latex pants, the actress wrote, “Hey Kim, Lolo did it first”, along with three emojis – a zipper mouth, a grinning face with sweat, as well as a laughing with tears emoji.

Karisma Kapoor was holidaying with friends and family in London last month. The Kapoors also celebrated actress Neetu Kapoor’s birthday in London. Karisma shared a glimpse of Kapoor’s fam-jam, have a look.

This stunning shot of Karisma and her BFFs –  Kareena Kapoor, Natasha Poonawalla, and Amrita Arora – screams friendship goals. While sharing the snap, the actress wrote, “No caption needed” with the hashtag “just us.”

On the work front, Karisma Kapoor will be seen in the crime drama Brown- The First Case.