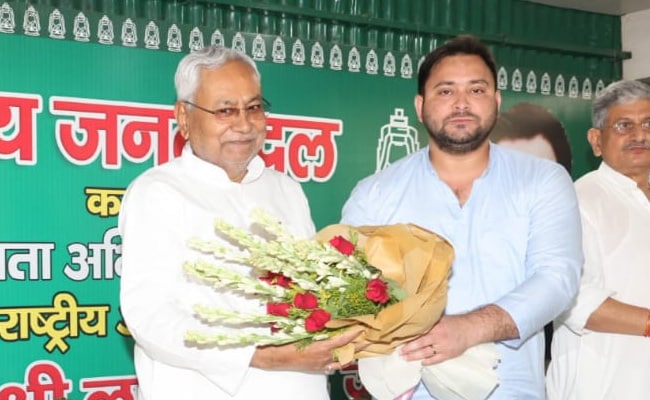 Tejashwi Yadav, whose RJD helms the Grand Alliance, is also scheduled to be sworn in.

Janata Dal (United) leader Nitish Kumar is scheduled to be sworn in as the chief minister of Bihar on Wednesday afternoon for a record eighth time. Mr Kumar will be administered the oath of office by Governor Phagu Chauhan at a simple ceremony inside the Raj Bhavan at 2 pm. Tejashwi Yadav, whose RJD helms the Grand Alliance that elected Mr Kumar as its leader on Tuesday, is also scheduled to be sworn in, with him returning as the deputy chief minister for the second time.

Here are the live updates:

Get NDTV UpdatesTurn on notifications to receive alerts as this story develops.

Nitish Kumar will take oath as Bihar CM today – for the 8th time. RJD leader Tejashwi Yadav is likely to be the Deputy CM of the state. #Bihar_Politicspic.twitter.com/kLDa9odcXu

It’s not only a Govt that’ll take oath, it’s ‘ghar wapasi’ of 2017-2020 mandate. It’s very important, especially in an era where BJP has decided to mangle democratic values – that only they would remain. #Bihar gave a message. It’s an oath of people of Bihar: RJD RS MP Manoj Jha pic.twitter.com/2MUOi4dDqd

Haryana Home Minister Anil Vij on Tuesday took a jibe at Nitish Kumar who parted ways with the BJP in Bihar yesterday to join hands with the Opposition parties to form government, and likened him to “migratory bird” stating that it is his “nature” to “jump from one branch to another”.

The remark of the BJP leader came a day after Nitish Kumar snapped ties with the BJP in Bihar alleging that the party “tried weakening the JD(U)”. Nitish Kumar, who had pulled out of the Grand Alliance in 2017 to reunite with its former ally BJP in 2017, once again joined hands with the Mahagathbandhan including RJD and other parties.

Haryana Minister said that it a matter of a few days.

“Nitish Kumar is a migratory bird. It is his nature to jump from one branch to another. By mistake, some birds have gathered on a branch. Nobody knows who will fly, when and where. It is a matter of a few days,” Anil Vij tweeted in Hindi.