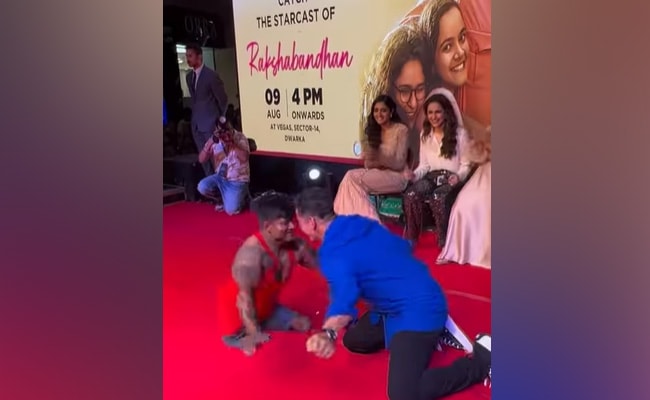 Amidst the promotions of his upcoming film, Raksha Bandhan, Akshay Kumar met a specially-abled fan in Delhi. And, the actor has shared a clip from the meeting on Instagram. The two even grooved to the beats of hit party number Sauda Khara Khara, from Akshay’s film Good Newwz. The actor has also penned a special note. It read, “Being an actor, I meet tons of people every day but few make such an impression. Met one such person, Vinod Thakur, yesterday during Raksha Bandhan’s promotion in Delhi. Your spirit is so pure and inspiring.”

The clip has become an instant hit on the social media platform. Take a look:

Akshay Kumar’s Raksha Bandhan will release on August 11. The film is directed by Aanand L Rai. Meanwhile, Akshay Kumar’s wife Twinkle Khanna has given her verdict on the film. She has dared the audience to leave the theatre without shedding a tear. Sharing the trailer of the film, Twinkle Khanna wrote, “Raksha Bandhan made me laugh in the first half and cry through the second. A movie about India we all pretend doesn’t exist. A reality that we wish didn’t exist. We have changed terms, from “dowry” to “gifts” but in homes across social-economic strata, variations of the custom loom large. It’s perhaps only cinema that has the power to burrow into the minds and hearts of people across the board. Raksha Bandhan may make you smile and crack up, but I dare you to leave the theatre dry-eyed.”

Akshay Kumar also has Ram Setu and an untitled film opposite Parineeti Chopra in his kitty.