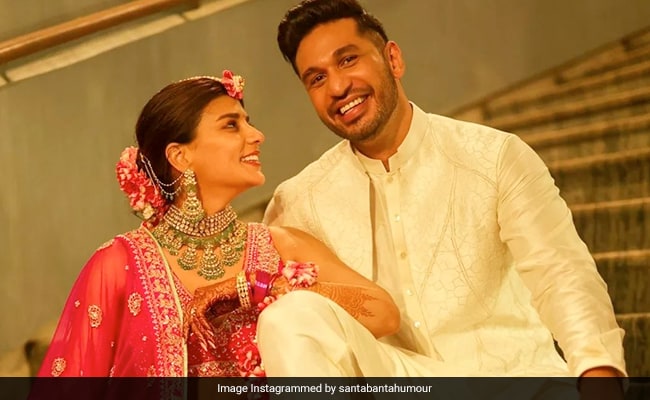 Singer Arjun Kanungo and his girlfriend, Carla Dennis, are all set to get married today (August 10) in the presence of their families and close friends. Now, ahead of their wedding, several pictures from their Mehendi ceremony are going viral on the internet. The couple can’t take their eyes off each other as they pose for the camera in the pictures. The singer looks dashing in an off-white kurta paired with a Nehru jacket. Carla, on the other hand, looks beautiful in a vibrant pink lehenga and has accessorised with a green necklace and statement earrings.

Take a look at the viral pictures:

Arjun Kanungo and Carla Dennis have been dating for the past seven years, and as per reports, the wedding will happen according to Hindu traditions. According to a report in Hindustan Times, Arjun will wear an outfit designed by Anita Dongre for the wedding, while Carla will be a Sabyasachi bride.

Meanwhile, the couple will host a post-wedding party on August 11 at Neuma for their industry friends. According to a report in Pinkvilla, the party will be attended by several Bollywood celebs, including Salman Khan, Bobby Deol, Varun Dhawan and Shraddha Kapoor.

A few days ago, Arjun Kanungo shared an adorable post with Carla Dennis and informed his fans that they are getting married “in less than a week”. In the captions, he wrote, “Marrying my best friend in less than a week Carlar Dennis are you readyyyyy”. Soon after, Carla replied, “I’m ready !!!!” followed by love-struck emoticons. His industry friends also flooded the comment section with best wishes. Gauahar Khan wrote, “Congratulations guys,” while Pragya Jaiswal, Sooraj Pancholi and Sonal Chauhan dropped heart emoticons.