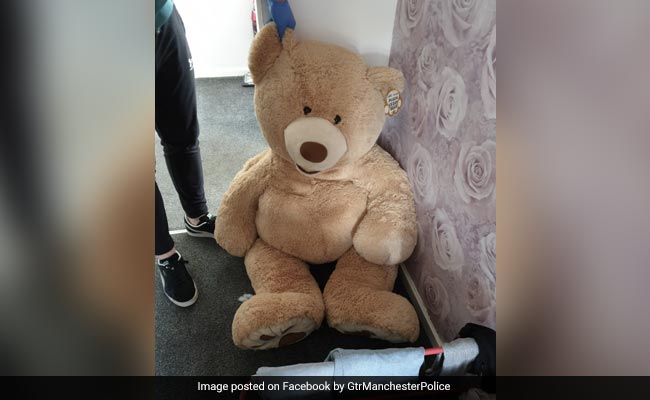 18-year-old Joshua Dobson had been wanted by cops since May.

A man in the United Kingdom who was wanted for car theft was sent to jail on Friday after police found him hiding inside a teddy bear.

According to a social media post by Greater Manchester Police, 18-year-old Joshua Dobson had been wanted by cops since May, when he stole a car before fuelling up without paying. Last month, when officers went to his address to arrest him, they noticed a large teddy bear on the property that appeared not to be entirely inanimate.

The cops found that the 18-year-old had stuffed himself inside the giant 5-foot teddy bear.

“When we went to arrest him, our officers noticed a large bear breathing in the address before finding Dobson hidden inside!” the Greater Manchester Police said on Facebook.

“He’s now stuffed behind bars after being sentenced last week for theft of a motor vehicle, driving while disqualified, and making off from a petrol station without payment,” the officials added.

Since being shared, the post has left netizens in splits. While one user wrote, “He will only have the bear necessities whilst in jail.” Another added, “Omg I had to check the date.. should have saved this for 1st April. I bearlieve he will be enjoying his marmalade sandwiches for the next 9 months.”

A third said, “Apprehended by officers on paw patrol,” while a fourth commented, “You have to give him 10 out of 10 for ingenuity”. A user also raised the daily valid point that the bear, which big, doesn’t appear human-sized – so how did the thief fit in there? “That’s not possible! Bear is not even big enough,” the comment read.