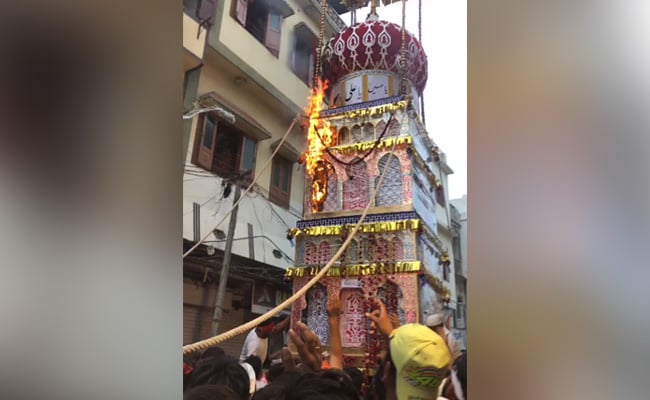 A family of Hindus helped avoid a major accident during a Muharram procession after a fire broke out on a ‘tajiya’ – a structure carried during the march – barely a few metres from the shop of murdered Udaipur tailor Kanhaiya Lal.

Lal, a tailor, was brutally murdered in a hate crime over a month ago by two men, who said they were avenging an insult to Islam, putting the entire region on the edge.

The top of a 25-feet high tajiya caught fire Tuesday evening, as the procession made its way through narrow lanes in Mochiwada street.

Muslims revellers trailing behind the tajiya failed to notice the fire immediately, which was spotted by locals who were witnessing the procession from their second or third floor balconies.

Locals, when they spotted the fire, did not waste time and took it upon themselves to put it out and started throwing water at it.

Ashish Chowadia, Rajkumar Solanki and their family members kept pouring water on the structure from their balconies till the flames were doused, the police said.

“Not only was the incident averted, but it also became an example of communal harmony. This incident has won everyone’s heart,” district collector Tara Chand Meena said.

Senior police officer Shipra Rajawat, who was also present there, said the fire was probably caused by a short circuit or sparks from the incense sticks. After the Hindus extinguished the fire, Muslims thanked them by clapping, she said.

She said that Mochiwada street is close to Mal Das street where Kanhaiya Lal was murdered on June 28.

Kanhaiya Lal was murdered by two men – Riaz Akhtari, who is also referred to as Riyaz Attari, and Ghouse Mohammad.

After the murder, the two released a video wielding the cleaver with which they hacked Lal, and said that he was beheaded for insulting Islam.