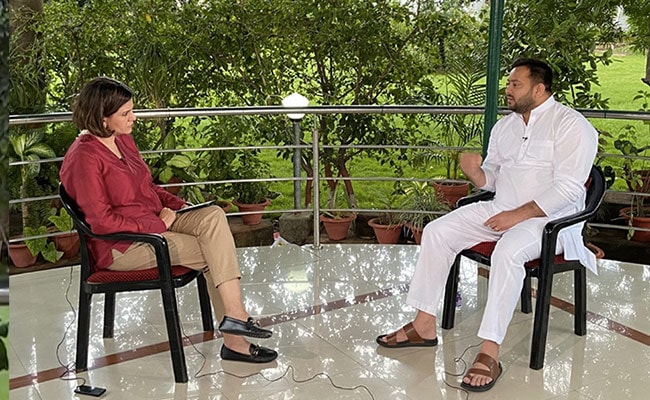 Tejashwi Yadav said, “We were able to see that Nitish ji was very uncomfortable”.

Tejashwi Yadav, the Number Two in Nitish Kumar’s brand-new Grand Alliance government, today cheered his boss over his move to end the alliance with the BJP. Asked if he was not concerned about action by the Enforcement Directorate — which the opposition alleges is used against them by the BJP-led Central government for political vendetta — he said, “I invite the Enforcement Directorate to come and stay”.

“Let them (investigating agencies) open an office at my house.  I’m issuing an invitation via your channel – ‘ED, CBI, Income Tax, please come and stay as long as you want to. Why go away and come after two months to raid us? Just stay, it’s easier’,” he told NDTV in an exclusive interview.

The Central agency is “working like BJP party’s cell”, added the leader, who has several corruption cases against him. It was over those corruption cases Mr Kumar — dubbed Mr Clean and Mr Good Governance across the state — had pointed to while calling off the alliance in 2017 and reviving his partnership with the BJP.

This time, as Mr Kumar ended ties with the BJP, several leaders of the party spoke of the cases against his allies.

So far, the CBI has filed cases against Rashtriya Janata Dal chief Lalu Yadav, his wife Rabri Devi, Tejashwi Yadav, and others in connection with alleged favours the RJD chief gave to a company as the country’s railway minister.

Mr Kumar, after taking oath yesterday, had also asserted that he was not scared of Central investigative agencies like the ED or the Central Bureau of Investigation.

Asked how the alliance came about this time, in view of the bitter break-up less than three years ago, Tejashwi Yadav said, “We were able to see that Nitish ji was very uncomfortable. The BJP was trying to impose on him. We could see in his face.

On how it all started, Mr Yadav asserted that it was “spontaneous” and there was “no pre-planned move”. He, however, admitted that the MLAs of the two parties had met and all were following the political developments keenly. “Nitish ji resigned and convinced our MLAs,” he said.

Nitish Kumar, he added, has experience. “He has administrative experience. He has social experience. Except Rajya Sabha he has been into all the houses. He was a union minister,” he said.

His message to the opposition? “All opposition parties must sit together. Make a roadmap. We are too late,”Tejashwi Yadav said.