“I Opened The Door And Saw…”: Story Of Swiggy Delivery Executive With Disability Moves Internet 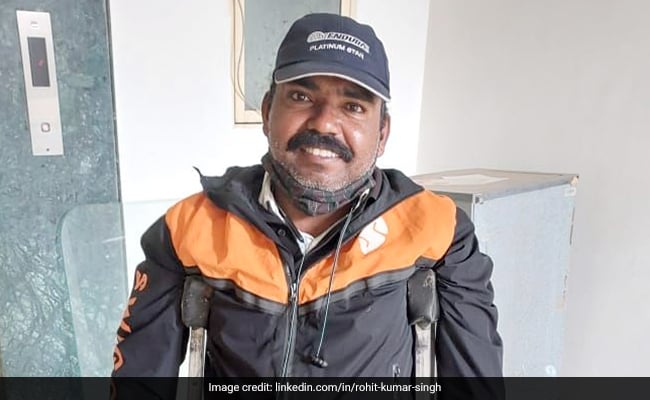 The delivery executive was identified as Krishnappa Rathod.

A food delivery executive’s life is hard. From cutting through heavy traffic to navigating difficult locations, they go through a lot to deliver food on time. Now, a heartwarming story of a Swiggy delivery guy with a disability has gone viral on the internet.

Bengaluru resident Rohit Kumar Singh shared the story of delivery executive named Krishnappa Rathod on LinkedIn. In the post, Mr Singh wrote that an order he placed on Swiggy was getting “delayed and delayed” when he decided to call the delivery guy to ask him about the estimated time of arrival.

He said the executive assured him in a comforting tone that he will deliver his order soon, however, even after a few more minutes when the food did not arrive, he dialled the man again. “He again responded with a very comforting tone & telling me just 5 minutes more,” Mr Singh wrote.

“In around next 5-10 minutes, the bell rang and the impatient me went quickly to open the door & maybe express my disappointment with the delay in the delivery,” the Bengaluru resident added. But seeing who the delivery person was, it was Mr Singh who was left “feeling stupid”.

According to Mr Singh, the delivery man was in his 40s with “grey hair, trying to balance himself with crutches”. “In my head, I was wondering what all struggle he had to go through to get this order to me. I immediately apologized to him and tried to have a conversation,” he wrote.

Further, Mr Singh said that Krishnappa Rathod lost his job at a cafe during the COVID-19 pandemic and since then has been “quite graciously” working as a delivery executive. Mr Rathod has three kids but due to his financial condition, he could not get all of his children to Bengaluru for a better education.

“From getting up in the early morning to working the entire day tirelessly defying all the odds is the superpower he possesses,” Mr Singh said about Mr Rathod. He also added that he spoke to the delivery guy for over 2-3 minutes, before he told him, “Sir I am getting late for my next delivery”.

Since being shared, the heartwarming story is making waves on social media. In the comment section, many users offered to help the delivery man.

One user wrote, “courage comes in various forms, shapes and colours.” Another added, “His heart-touching smile and lots of dream in his eyes makes my day 🙂 Thanks for sharing such an inspiring anecdote with us Rohit Kumar Singh.” “I can give a job in my cafe in Bangalore, we have in Whitefield & btm locations,” commented third.