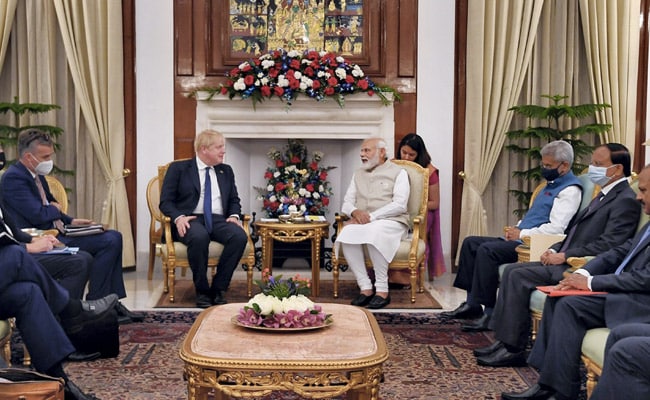 India and the UK will continue to work intensively to meet the Diwali deadline at the end of October for a Free Trade Agreement (FTA) announced during the India visit of outgoing British Prime Minister Boris Johnson, a UK government statement said.

In a joint outcome statement on the ongoing FTA negotiations released on Wednesday evening, the Department for International Trade (DIT) said the fifth round involved detailed draft treaty text discussion over 85 separate sessions and 15 policy areas.

The latest round concluded on July 29, with the next due to be held in the UK later this month.

“Indian and UK officials will continue to work intensively throughout the summer towards our target to conclude the majority of talks on a comprehensive and balanced Free Trade Agreement by the end of October 2022,” the DIT statement said.

“Negotiation officials undertook these technical talks in a hybrid fashion – with some of the teams meeting in New Delhi, India, and the majority of officials joining virtually. For this round of negotiations, technical experts from both sides came together for detailed draft treaty text discussions in 85 separate sessions covering 15 policy areas,” it said.

The statement follows Commerce and Industry Minister Piyush Goyal’s statement earlier this week at the Vyapari Udyami Sammelan in New Delhi that negotiations for the India-UK FTA are “moving at a faster pace”. He was comparing this to the recently concluded trade deal with the UAE, which the minister said was done in “record time”.

Last month, The House of Commons International Agreements Committee, in a report entitled ‘UK-India free trade agreement: Scrutiny of the Government’s Negotiating Objectives’, questioned the Diwali deadline set for the conclusion of the negotiations by Johnson during his visit to India in April.

The committee cautioned that could risk giving up a good deal for a fast one, by setting a “time ambition over and above content”.

The committee has called on the government to publish a comprehensive trade policy that provides a framework within which all negotiations can be conducted. This is now expected to be taken up after Parliament is back from its summer recess in September, by which time the UK is expected to have a new Prime Minister – either former Chancellor Rishi Sunak or Foreign Secretary Liz Truss.