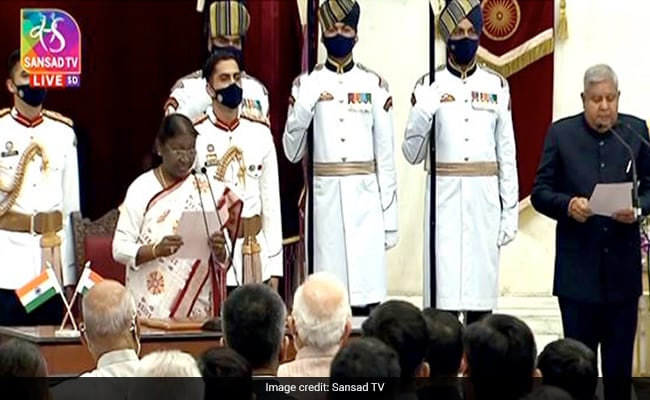 Jagdeep Dhankhar, the political veteran from Rajasthan who also served as Governor of Bengal, today took oath as the 14th Vice-President of India. In the election on August 6, he defeated the Congress’s Margaret Alva, who was the Opposition candidate, by getting 74.36 per cent of the votes — the highest winning margin in the last six V-P elections since 1997.

The oath was administered by President Droupadi Murmu, who too was elected recently. Mr Dhankhar succeeds M Venkaiah Naidu, whose term ended yesterday; and will be chairperson of the Rajya Sabha by default. Mr Naidu, a former BJP chief and union minister, had won comfortably in 2017.

His home state goes to polls next year, and placing a Jat and a “farmer’s son” in the second highest Constitutional position in India may help the BJP’s chances to dislodge the Congress government there. In Haryana, too, Jats form a significant chunk, where the BJP could not retain power on its own last time, having to take support from Dushyant Chautala’s party that has some heft in the community.

“I never thought, even in my dreams, that a person with a humble background like me will get this opportunity,” Mr Dhankhar, 71, said at the time of filing his nomination papers.

Mamata Banerjee’s Trinamool Congress — which had a less-than-cordial equation with him when he was governor — decided to abstain from the voting. It did not back Margaret Alva for it was unhappy with “the manner in which the Opposition candidate was chosen”, but said “there was no possibility of going with the BJP nominee” either.

Before coming to the BJP over a decade ago, Jagdeep Dhankar had stints in the Congress and Janata Dal. He was a lawyer at the Rajasthan High Court when he entered politics, winning the 1989 Lok Sabha election from Jhunjhunu, his home region. In the short-lived, Congress-supported government of Chandra Shekhar, Mr Dhankhar was a minister.

He joined the Congress ahead of the 1991 Lok Sabha election but lost from Ajmer even as the party came to power and PV Narasimha Rao became PM. He then shifted to state politics and served as MLA (1993-98). But, as Ashok Gehlot rose to the top of Congress in Rajasthan, Mr Dhankhar saw his chance dim. After years of being in the shadows, he shifted to the BJP by the 2000s.

In the BJP, he mostly worked within the organisation for nearly two decades before his name made national headlines again three years ago. In 2019, he was appointed Governor of West Bengal.

Mamata Banerjee’s government there accused him of doing the bidding of the BJP-led central government. Mr Dhankhar did not try to hide his dislikes either. The controversy-a-day tenure gave more prominence to Mr Dhankhar. He resigned last month to get into the Vice-Presidential contest.