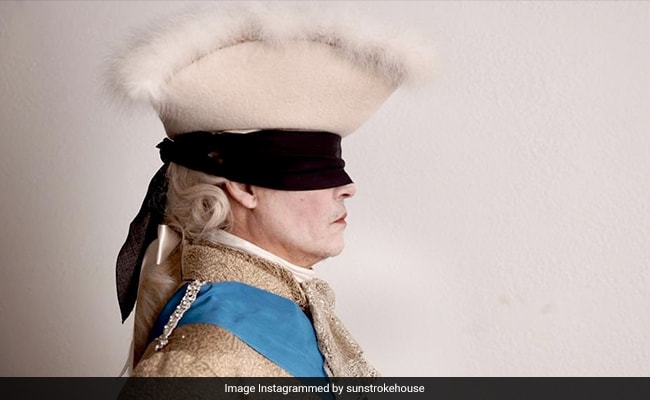 Johnny Depp’s first look as controversial King Louis XV has been released by a French production house from director Maiwenn’s historical love story “Jeanne du Barry“. This is Mr Depp’s first film role since his highly publicised defamation trial against ex-wife Amber Heard. In its verdict on June 1, the jury at the Virginia court found that Ms heard had defamed Mr Depp by her 2018 opinion piece in The Washington Post in which she said she is the victim of domestic violence. The jury also found that Mr Depp defamed Ms Heard while fighting her charges.

The shooting for “Jeanne du Barry” started in the month of July in Paris, according to Variety. The title role is being played by Maiwenn herself.

The photo circulating online shows Mr Depp in regal clothing, an intimidating hat with white and curly locks. His eyes are covered with a black cloth, which signifies the king turning a blind eye towards his corruption.

According to Variety, the film is inspired by the life of Jeanne, a young working-class woman who uses her intelligence and allure to climb the social hierarchy. When King Louis XV spots her, he madly falls in love with the woman and keeps her close against all propriety and etiquette.

Deadline reported that the shooting started on July 26 and will continue for 11 weeks. It quoted Why Not Productions to say that the film will be shot in Versailles and other chateaux in the Paris region as well as the studio.