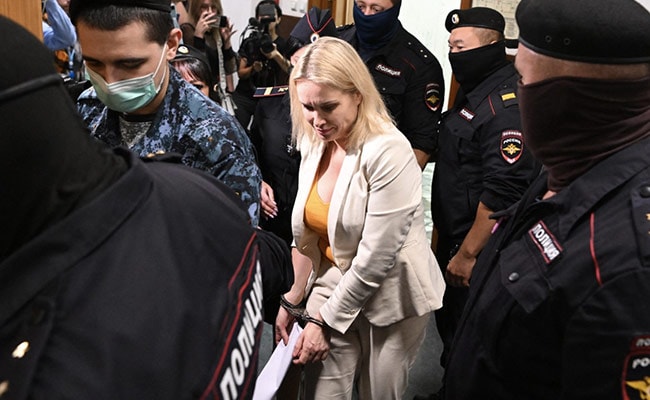 If convicted, Marina Ovsyannikova faces up to 10 years in prison.

On Wednesday, investigators detained Ovsyannikova, 44, and charged her with spreading information about the Russian armed forces deemed false by the government.

The mother of two faces up to 10 years in prison, if convicted.

In March, Ovsyannikova, then an editor at Channel One television, made global headlines when she barged onto the set of its flagship Vremya (Time) evening news, holding a poster reading “No War”.

The house arrest is not connected to that particular protest, however.

It is linked to a one-woman protest in mid-July near the Kremlin, when Ovsyannikova held a poster that read “Putin is a murderer, his soldiers are fascists”.

Three “blood-soaked” toy dolls were laid on the ground in front of her.

At Moscow’s Basmanny district court on Thursday, she was placed in a cage surrounded by several policemen.

She held a sign that read “May the dead children haunt you in your dreams”.

Her lawyer Dmitry Zakhvatov wrote on messaging app Telegram that that “even” the Soviet Union’s most brutal serial killer Andrei Chikatilo was not guarded so closely.

During a closed-door hearing, the court ruled that Ovsyannkova be placed under house arrest until October 9.

“I even don’t know what to say. Good that it is not jail? Certainly good,” Zakhvatov said.

“But it is still sickening.”

Criticism of Putin’s decision to send troops to Ukraine on February 24 has been virtually outlawed in Russia.

French President Emmanuel Macron has offered Ovsyannikova, who worked for Russian state TV for 19 years, asylum or other forms of consular protection.

The criminal probe against Ovsyannikova was launched after two Moscow courts ordered the journalist to pay fines for discrediting the Russian army on various occasions.

In early July, she said she was returning to Russia to settle a dispute over the custody of her two children.

Since her return, Ovsyannikova came out to support opposition politician Yashin in court and published anti-government posts online. She was briefly detained by police near her home in mid-July.