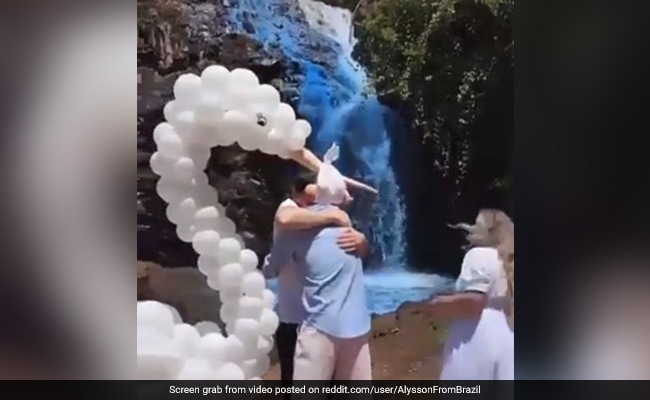 The couple have not been identified by the local media in Brazil.

A couple in Brazil are facing criticism for dying a local waterfall blue to announce the birth of their son. The incident took place during a gender-reveal party in Mato Grasso state of Brazil on Sunday, according to a report in New York Post. The local government launched an investigation after the photos of the celebrations, posted by the parents-to-be, went viral. They could be charged with an environmental crime, the outlet further said. The unidentified couple deleted the original video but it has since been uploaded onto multiple social media platforms.

The images show the Queima-Pe River waterfall, near the municipality of Tangara da Serra, coloured in bright blue. A white stork made out of balloons is also seen in the photo.

The 18-metre-high waterfall is famous as a destination for ecological tourism activities, according to the Post.

The waterfall is named after Queima-Pe River, which is the main source of water for Tangara da Serra. Local residents were quoted as saying by New York Post that the water will be contaminated now for the area that recently suffered a very long period of drought.

Many social media users are calling for the couple to be charged with environmental crime.

“Congratulations… you will be the parents of a beautiful environmental crime,” one of the locals – environmental engineer Vanessa Costa – posted on Reddit, according to the Post. “Why does nature keep getting damaged because these people think they’re special?” another user posted.

The secretary for the environment of the state government released a statement saying the couple will be investigated to ascertain if they committed any crime.